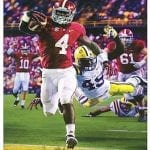 This print feature’s T.J. Yeldon’s game-winning touchdown reception from quarterback AJ McCarron in a thrilling come from behind drive at LSU’s Tiger Stadium in Baton Rouge.

This print is entitled,

The title and other info about the game are listed in the bottom margin of the print, (not shown)

Probably the instant Alabama’s T.J. Yeldon crossed the goal line for the game-winning touchdown at LSU, you sensed that the next Daniel A. Moore painting would be on the way.

It captures Yeldon’s 28-yard touchdown on a screen pass with 51 seconds left that lifted No. 1 Alabama to a breathtaking 21-17 victory on Nov. 3 at Baton Rouge, La.

“That game/drive/play was huge and very meaningful in so many ways, and I don’t think anything can take away from that,” he said in an email, referring to Alabama’s 29-24 loss the following week to Texas A&M.

“Some of Bama’s greatest and most memorable plays had no bearing on a National Championship, as evidenced by The Kick, The Sack and The Catch — to name a few. Despite A&M’s win over Alabama, the Tide still has an outside shot at having a chance to play for it all again. So who knows…that Death Valley Drive just may prove to be pivotal after all!”