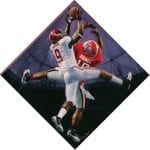 HERE’S AN AWESOME DANIEL MOORE PRINT ENTITLED, “HIGH TIDE”.  This limited edition signed and numbered print commemorates Amari Cooper’s 44 yard acrobatic catch over Georgia’s Bacarri Rambo. The 2012 SEC Championship Game was played on December 1, 2012, in the Georgia Dome in Atlanta, Georgia, and determined the 2012 football champion of the Southeastern Conference. The game featured the Georgia Bulldogs, winners of the SEC Eastern Division vs the Alabama Crimson Tide, the winner of the SEC Western Division.

Georgia was the designated “home” team. The game was televised by CBS Sports for the twelfth straight season. Alabama won the game 32-28 improving their record to 4-4 in the title game. Alabama’s Eddie Lacy was named MVP after rushing for 181 yards and two touchdowns and catapulted the Tide into the BCS National Championship game.

The finished version will measure approximately 19 x 19 and will come with a Certificate of Authenticity and be hand signed and numbered by Daniel Moore. The print can be framed either in it’s original “diamond” shape or rotated to become a regular square print.

We offer both standard and deluxe framing options for this print. When placing your order, please choose either “print only” or choose one of the two framing options.